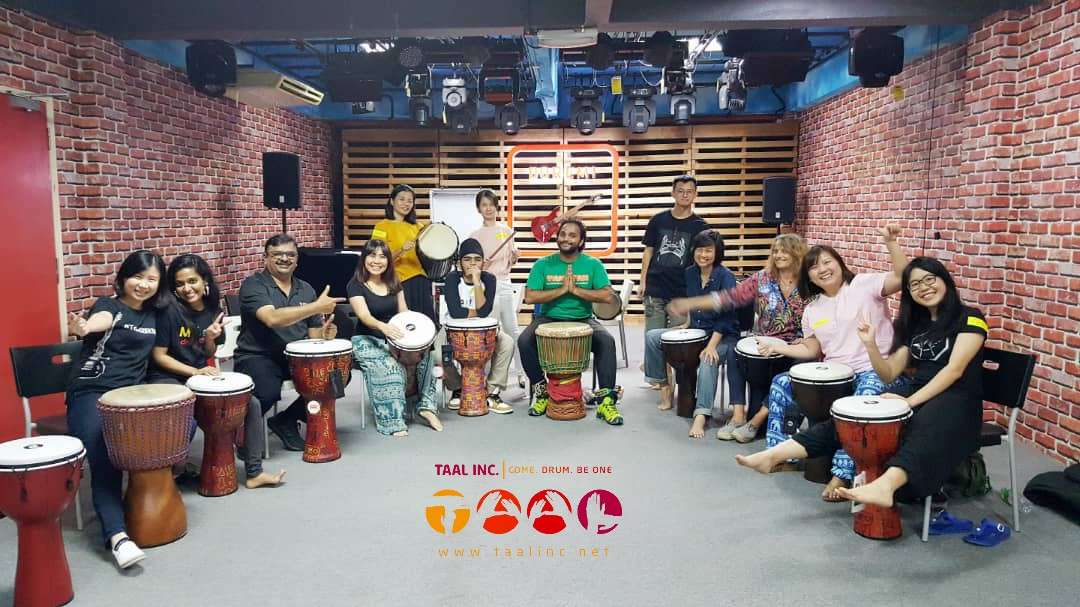 The day began with a tummy tingle at the Grandmaster Drum Workshop.. This wasn’t the post-Taco-Bell-tummy-tingle or a night-out-at-Lucy’s-Tavern-with-crazy-but-lovely-people-and-many-AMF’s-kind-of-tummy-tingle…. but a nice warm exiting feeling.After chowing down on some delicious and homely South Indian food at the Madras Cafe’ (this should be my last Indian meal until I get back home now), we drove back home so that I could finish my final bits of packing while I was being serenaded by Arpana Arjun who was playing the exquisite, ‘Prelude’, by Rachmaninoff. Watch out San Diego, Carmel Valley has a new musical storm brewing! I moved into the Rodeway Inn and then set off on my last drive with Mrs. Swathi Arjun and Arpana Arjun to get a feel of places in San Diego I wouldn’t have otherwise been witness to, before I reached Kava Gallery. Here I met Jeremy Tomasck, the man taking care of the two grandmasters on their tours and travels across the world as they enriched peoples lives rhythmically and generally.This is when I bought my beautiful new darling. My first traditional, hand-carved, West-African djembe made out of Lenke wood.

I chose out of two equally good djembes. This one spoke to me. I shall use it through the duration of the Djembe Workshop and fly back with it and pray to all the Indian Gods that it arrives in Chattrapati Shivai Terminus, Mumbai in one piece! After this, Raymond, one of the TTM staff members drove a couple of us, who had met up at Kava, to the
venue for the evenings welcome gathering.

What’s truly amazing is to see the range of people the djembe has attracted today. This instrument has inspired many a folk from every corner of the world, from various heritages and backgrounds to make place in their lives and hearts for the djembe. The group is truly a global one. It felt like a United Nations Delegate meeting at times. Almost every continent was sufficiently represented. Truly inspiring. Amongst the famimliar faces were,James Kwan (Director, TTM Hong Kong), Namory (djmebefola from South Korea), Bing (from Lila Drums, Singapore) and of course, Tara and Michi. In addition, there were djembe enthusiasts from Brazil, China, Israel and so on… And I thought I was the only one travelling halfway across the world for this workshop.

I have been having a wonderful time food-wise in San Diego. This evenings meal was prepared specially by Mamady’s Nephew’s family. Fatimata was head chef and she had helpers who were busy toiling in the kitchen since before the time we arrived. Needless to say the meal was transcendentally delicious. Fatimata’s mother has been preparing meals for participants of djembe workshops in Guinea with Mamady Keita for years. Now as time passes, Fatimata has moved to the States and continues this tradtion of imparting gastronomic culture to the future flag-bearers of West-African culture.The meal consisted of West-African fried plantains, chicken prepared in a peanut based sauce and chicken prepared with capsicum, cilantro and pepper with rice. I noticed that the chatter across the room decreased in volume  as the food for served; a global positive testimony any chef anywhere.Next, Monette, officially presented Mamady and Famoudou to the participants and the two masters expressed themselves.

And Mamady pointed to the room full of participants from the Orient and the Occident  He introduced every country that was present in the group. Famoudou’s face conveyed joy, his forehead literally showed the years of striving without the luxuries of life, all for one thing – peace and joy through the djembe He rubbed his face with his right hand and smiled a smile of relief, of faith and camaraderie knowing that his efforts were not in vain. The dream of a world without borders of the heart shall, in fact, materialize. I felt tears well up in my eyes as the masters emphasized the importance of ones roots, ones history and how important it is to stay on the path, any chosen path, no matter what. Famoudou Konate has known Mamady since he was a child and since then, they have shared a similar understanding, connection and most importantly, a similar mentality and outlook towards the djembe. There has never been unhealthy competition and jealousy between them. They have always respected, revered and learned from each other. They have been able to celebrate each other as not only djembefola’s of the highest calibre but also as two individuals coming together for one purpose, one cause, one rhythm.

As the evening progressed and the dessert section was laid out on the table, I started feeling a sense of inspiration. This was similar to the feeling at the start of Mini-Guinea, Singapore in September 2010. Similar, but different. We start our Drum Lessons tomorrow morning 10:00 am onwards (for the intermediate level) and 2:00 pm onwards (for the advanced level). Mamady himself was excited as he said that he had a lot of traditional material he would teach us and also a lot of new material that he would be testing on us guinea pigs.

I say, bring it on… Come back tomorrow…

Varun is the founder and director of Taal Inc.
The visionary behind the motto
Come. Drum. Be One.
To read more about him Click Here